Leapfrog is a well-established, but not particularly popular in Russia manufacturer of 3D printers. As a recommendation, we can say that Leapfrog 3D-printers have adopted the division of Rolls-Royce, engaged in aircraft engine building. 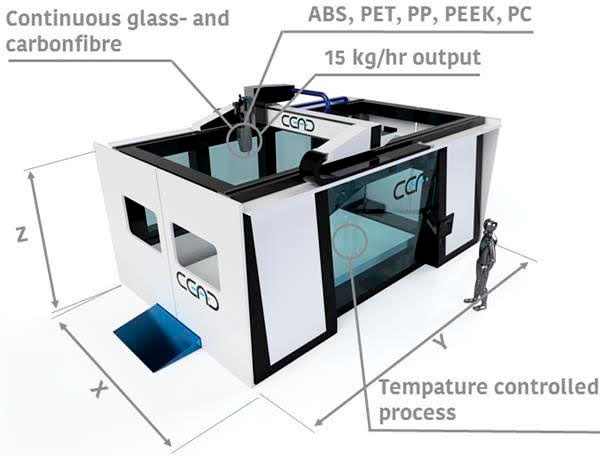 Developers from the Netherlands have created the penultimate 3D printer Mbot with two semi-independent heads, able to work in unison or in mirror mode, at the same time printing two models or halves of a symmetrical product.

They developed the penultimate 3D printer because now the team has organized a new startup called "CEAD" and started industrial 3D printing. This is their priority. The task is to create a large-format 3D printer for printing with thermoplastic reinforced with ongoing fibers. Still in the world, there were two companies with similar goals – Markforged American and Russian "Risoprint", recently changed the port of registry in Luxembourg. Both of these enterprises create desktop FDM systems suitable for printing small parts, and the founders of Leapfrog invent large-format 3D printer for printing details up to 4x2x1.5 meters.

At what stage is the project, the team has not yet disclosed, although the development began in September 2017. Apparently, a working prototype has already been built, because the engineers boast that they managed to achieve a performance of 25 kg/h against the given fifteen. Apart from this, they plan a combined circuit with an integrated CNC-milling machine for post-processing of 3D-printed products.

As the team assures, shipbuilders are already interested in development. They are interested in additive production of composite parts, because the startup is located near the Rotterdam port - the largest in Europe and known for such curiosities as 3D printed propellers. Approximately in the middle of this year the first prototype of the new additive system will be transmitted to Poly Products for testing.